My name is Genevieve Conley and I’d like to tell you about an amazing experience I’ve had.
Being a massage therapist has allowed me to help one of my favorite people in the world: my father. Several years ago he was told that he needed foot surgery, but could not find a surgeon to perform the procedure because of how bad the circulation in his legs and feet were from being diabetic for over half of his life.
Hearing this news I began giving him leg massage once a week to improve the circulation. After about two months you could see a noticeable difference in his legs. They had become much less swollen and his skin returned to its normal texture and color.
After about 9 months his surgeon said that his circulation had improved so much that they would perform the surgery but warned that it would take longer for his foot to heal than most people who have the surgery.
After the surgery was performed I continued to massage my father’s legs. His doctor was very pleased that he was healing faster than expected.
It has now been about 2 years since my father’s foot surgery and I’m still giving him leg massages. He feels that it has helped him be more active and his doctor told me that I may have saved his legs from amputation.
Massage therapy is an excellent way to improve your circulation and reduce inflammation. So if you have circulation or swelling problems please come to visit us and we’ll help you the best we can.

Below are actual photos of my father’s legs before and after: 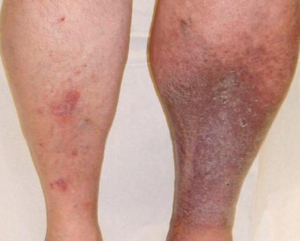 Contact Us Here For A FREE
Consultation With Our Doctor

The information on this website is for informational purposes only; it is deemed accurate but not guaranteed. It does not constitute professional advice. Testimonials are not a guarantee, warranty or prediction of what your experience with us will be. By providing certain contact information herein, you are expressly authorizing the recipient of this message to contact you via the methods of communication provided.

How did we do?

Note: Your review may be shared publicly.